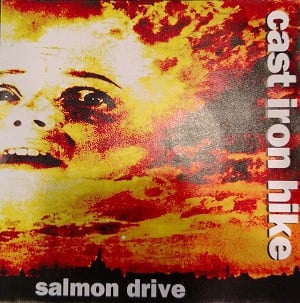 We got ahold of a grip of these long out of print first EP from Cast Iron Hike from Jonah (Only Living Witness) who put it out through his label in 1996. These have been in storage for decades but they are in great shape!

A1 One Grand Soap Opera
A2 Swimming Through Sand
B Stalemate

"These songs were recorded in November 1994 in Boston, MA. Brian Mcternan handled the techinical difficulties while we persistently drove him insane. What you're holding in front of you is a documentation of our earliest efforts as a band. This is also the first recorded effort out of Boston's now renowned Salad Days Studio. In April of 1995 these songs were released as a four song c.d. by Boston's Big Wheel Records. Incidentally, it was their first release as a label. One year later with the c.d. out of print, our friends at Secular Records expressed an interest in re-releasing The Salmon Drive EP. So, thanks to them you now own seven inches of new vinyl of which contains three of the first songs recorded & released by Cast Iron Hike. Enjoy."

Heathen Prayer - The Devil and the Day Laborer cassette
$6.50

Controller - The True Sense of Strength Within LP
$14.00